Always the family screw up, the baby sister who never finished anything, Emma Kate Mayfair has dropped out of college…again. There’s only one way she could make this worse: getting herself married in Vegas to a guy she doesn’t even know. 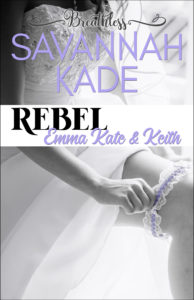 Underneath her fingertips were yards and yards of white tulle. It looked like she’d slept on the puffy cloud. Far too scared now to just look down at her clothing, she touched the front of her chest. Yup. That was lacework. And beading.

She found more tulle trailing down her back from the tiara pinned into her hair. A tiara. Of course, she was wearing a tiara.

As she rolled her head to the side and looked down, she saw him. Dark hair, high cut cheekbones, long, inky lashes unmoving because he was out cold. Broad shoulders splayed across the bed on the other side.

He was wearing a tux, and Emma Kate was pretty sure she’d just gotten herself in a world of trouble. As she gets to know Keith, she finds she has another problem on her hands: How will she tell her sisters he’s the best mistake she ever made?

Enter the world of Breathless, Georgia. Real love is just around the corner…