Because real life gets messy, but real love is worth it! 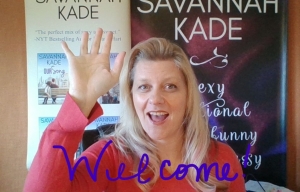 I believe in characters with human flaws. In my head, they are real people…changing, opening up, and finding the real deal. That way, when you read, you can fall madly in love right alongside them. Falling in love is a journey, whether it happens in an instant or even over years. True love is often messy, and sometimes you have to fall on your ass to find the right person standing there to help you up!

Savannah created her first romance novella at age eight. Even then it was clear she was looking for a story about a breakthrough. Though that particular book shall never again see the light of day (please, don’t even ask) it set the stage for everything after.

Now even nerdier than she was at eight, Savannah holds several degrees in human biology and neuroscience—not that it makes true love any easier. She’s become an ardent defender of stray dogs, a protector of frogs and random wildlife in her yard, and a firm believer that women need to be straightening each other’s crowns for no reason other than we are all in this together.

Home is a ranch house on several acres just outside Nashville, Tennessee. A decade in Los Angeles cemented contradictory loves of city streets and open land. Her two kids are nerds just like her, and her husband is her own “makes me a better person” man.  They have their own small pack of rescue dogs named Travesty, Mayhem, Danger and Discord. And there’s a cat named Delilah who gives zero craps that she only weighs 1/8th of what each dog does. She remembers when they were puppies.

Savannah is confident we all have baggage—it’s just that some of us carry it in a garbage bag and some in the matching Louis Vuitton set. Finding a perfect partner is always a challenge in a Savannah Kade romance, but her hope is to leave her characters as their best selves, living their lives with their arms wide open.

So come join me!

You can always reach out to me at ReadSavannahKade@gmail.com — please let me know your favorite books, recommendations, and if you found any easter eggs in my stories 🙂 I will write back!

Sign up here for Truly, Madly, Deeply –you’ll get a free copy of WishCraft and you’ll also get a chance to win in my giveaways. Stay up to date on new releases, find new authors, tell me what you’ve been reading, and so much more.

Her newest series is a hit. I could not wait for book three and I hope there are more coming. But you can read two “Paradise, Idaho” series from her and the entire “New Zealand” series, as well.

The first of the “Evidence” series. All seven books feature scientist heroines and the best possible mix of romance and suspense. Grant is an auto-buy for me!

A wonderfully written twist on Beauty and The Beast. Lyrical in style and raw with heart. On my new “must read” list.

Out of the Mist – Lauren Giordano

This series is excellent romantic suspense with instant (and believable) heat between the main characters. You can also check out her “Blueprint for love” series.

I always have fun linking my books together. And the other day I was talking about it and my reader said, “That was her!” Yes, that was. So here’s the set up and a few extra links at the end . . .

In The Wilder Books, JD and TJ are brothers, that’s probably pretty obvious.

Shay (from Heartstrings) is the older sister of Zoe (who gets her own story in Shooting Star from the Love Found Us series.)

Shay and Zoe are also cousins to Ever Halifax. You’ll get her story in the next series, set in the small town of Breathless, Georgia.

Alex (from Hollywood Ending) is also the brother of Jane Copeland, who will also show up in the future series, Breathless.

There’s one character who has managed to hit all three series. If you guessed Jessica Valverde, you’re right! she was the detective who worked with Craig in Heartstrings from the Wilder Books. She also was Luke Salzone’s partner in DreamWalker from the Touch of Magick series. And she finally gets her own story in Hollywood Ending from the Love Found Us series.

In the Dark Falls romantic suspense series, you’ll meet Grace Lee & Nate Ryder (Grace is from Breathless, Ga, and her cousin Keith will turn up in that series.) Then you’ll meet Risa Caldwell & Ethan Eames. Ethan is related to a character I write in my suspense series as A.J. Scudiere.

Keep your eyes peeled for the new series, BREATHLESS, starting in 2019!