The kiss was soft, but not tentative. He wasn’t asking. He’d already asked and she’d said yes. 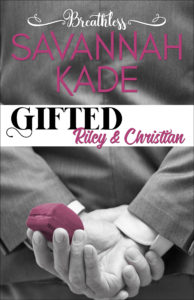 Labeled “gifted” at an early age, Riley Zayat has spent her life fighting social expectations. Now she’s finally landed her dream job, but brilliant kids need more than one person can give.

Christian has returned home to Breathless financially wealthy but emotionally burned out. The rigidity and meticulousness that make him such a talented programmer also make him impossible to read, and it’s killing Riley to have no idea if her feelings are returned.

Neither of them has room for a love they both need, but don’t know how to make work. He has no clue how to win the vibrant teacher over, so it’s not a surprise their budding relationship is rocky from the start. Can he learn to bend? Does she have enough Southern steel in her spine to break the rules and take a risk on the one man who just might be worth keeping?

Gifted is a romance for anyone who wants to believe in true love. This is the first book in the Breathless series—small town Southern romance with swoon-worthy characters and real love. Fall head over heels for Riley and Christian in Gifted now!